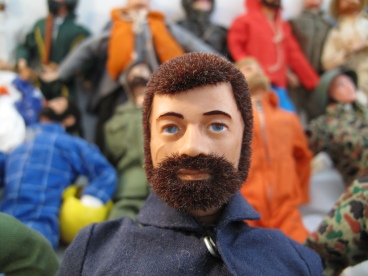 You may know someone with a beard like this.

If you look at the success of Kaws, plastic toys are cool, right ? But what´s the allure of movable fighting men? Basically, a doll, created in the mid-60s … for boys.

I´m not a toy collector, but I used to play with 80´s G.I. Joe toys. It´s wild to think that I used to get lost in play for hours with a bunch of little men with plastic weapons, unleashing tactical assaults with a hover craft, and borrowing from images of Arnold Schwarzenegger, or Bruce Lee type destruction.

Toys meant a lot to me back then. When I kept seeing flyers around my local coffee shops for  MUJAM, a self-styled toy museum featuring a visiting G.I. Joe exhibit, I knew I wanted to be there.

I noticed the flyer´s map put the museum in Doctores. It´s a colonia, or neighborhood, with a reputation for being one of the more dangerous D.F. hoods. Part of this legacy has to do with high rates of muggings and auto parts thefts. La Jornada breaks down the criminal roots of the colonia. Doctores also has its own public Malverde shrine.

The area is important as an active hospital zone, providing local  health care, government and judicial buildings are located there, and every Sunday you can find great deals on produce at the tianguis along Dr Erazo.  Lucha libre matches at Arena Mexico feel safe and under control, especially when crowds of foreigners spill out onto the streets at 11pm every Friday night. The museum Estación Indianilla should be on your list if museum hopping in Doctores.

It´s odd that there´s this sanctuary of toys in a hood that´s typically avoided by visitors. The collection belongs to Doctores resident Roberto Shimizu, who in this Vice magazine interview, seems like a hoarder.