I´m starting J School in a couple weeks (cue, Nasir),  so it´s fitting I get into the news media state of mind, for a minute.

You never set out to find great movies on GV, but every now and again, as if the Internet content gods want to prove their might, they drop a gem on you (cue, Havoc).

Playwright/screenwriter Paddy Chayefsky laid it all out like a genius. Here are the words from the iconic moment. (via)

I don’t want you to riot. I

don’t want you to protest. I

don’t want you to write your

congressmen. Because I wouldn’t

know what to tell you to write.

I don’t know what to do about the

depression and the inflation and

the defense budget and the Russians

and crime in the street. All

I know is first you got to get

mad as hell and I’m not going

to take this any more. I’m a

human being, goddammit. My life

get up now. I want you to get

out of your chairs and go to

the window. Right now. I want

you to go to the window, open

it, and stick your head out

and yell. I want you to yell:

going to take this any more!”

This 1976 movie continues to ring true, in many ways, today. There´s no Howard Beale, but you can flip on some local networks and catch Help Me Howard. Not the same thing exactly, I know. But Chayefsky´s work saw the dawn of the decline, with its satyrical look at the ¨corporatization of the news media¨. Check out this 2004 slideshow, which breaks down who owns the platter your news i s served on. It´s by ex-NYT editor, Doreen Weisenhaus of the Univ. of Hong Kong´s Journalism and Media Studies Centre.

This one is a keeper. Cop one.

Depending on where you grew up —- say, from the middle school years through high school years — you probably didn´t know a lot of Black kids who were into punk rock.  Not to get all Bill Cosby on you or anything, but when you grow up in certain neighborhoods, falling outside the ¨norm¨ just isn´t tolerated. There´s a whole sect of brothers who think Hendrix is some really exotic stuff, not socially accepted on some corners.

It´s all connected to the same vibe, the same origins and the same angst and rebellion, según yo. That´s why I like this week´s pick, James Spooner´s documentary, Afro-Punk (2003 ). While it´s a bit obvious in places,  I felt it suffered from poor pacing. There were a lot of voices involved in the doc, and some great punk rock artists. It´s most astute on issues related to being Black in a punk environment, tackling some important topics such as the question of Blackness. How can Black kids in Southern California, New York City, Cleveland and Detroit, who are into punk somehow be considered ¨less Black¨? Like in my N.J. town, why do they get beat up and picked on, as they walk from school to their homes, wearing a Bad Brains, Slayer or Metallica shirt, in predominantly Black neighborhoods? Not sure if that still counts with today´s version of those same bullying kids, wearing colorful skinny jeans. Kind of balances things out.

Via the Google Video link:

Spooner continues his involvement in the Afro-Punk space with a festival in Brooklyn. Check out coverage from last week´s Afro-Punk Festival in the NYT, SPIN, and NY Press.

For a more lighthearted take on what it means to be a punk outsider, watch SLC Punk! (1998).

I wouldn´t mind doing a little in-depth research on late 1960s Mexican schlock, wrestling, horror cinema. Some of the films resulting from this crazy mix of genres are interesting.

The thing that really grabbed me about Night of the Bloody Apes, the 1972 English-dubbed version of the movie in the poster above, was the opening scene of female masked wrestling (or lucha libre femenil).  This isn´t any of that G.L.O.W stuff.

All Movie Guide sums up the plot with an accurate description of the antagonist:

…A hairy gorilla-man with a wrestler’s physique who loves nothing more than to rape women and rip men’s faces off. The only one who can put a stop to this horrific rampage is — naturally — a masked female wrestler.

One version of this film was called Horror y sexo.

After I saw Daughter´s of Darkness (1971), I had to put it in my top5 favorite vampire flicks list. It´s easily one of the sexiest out there, filled with that never-really gone away early 70s Euro fashion. Sunglasses. Kinky Shakespeare.

I´ve never been an extreme dog lover, but last night I gave Beba (feminine form of ¨baby¨) a bath. Beba is one of Mexico  City´s street dogs. She lives in Colonia Roma, on a busy calle dotted with hotels, taco stands and upscale restaurants. She´s not a comedienne, but she can be wildly entertaining, especially when she´s hungry. She´s finicky, though: ham, cheese, sausages or chicken for this perra.

If you´ve traveled around South America, maybe you´ve seen roving packs of dogs. I know I did on trips to Chile and Colombia in the past. Dog populations seem out of control in some places, and I´m always curious about things local governments do to control them.

In Mexico City, I don´t see that problem, maybe in the ¨Establo¨.  There are groups here that look out for these animals. The only reason Beba, whose only consistent home is the patch of sidewalk in front of the garage where she ¨works¨, hasn´t been scooped up by canine enforcement is because she has an i.d. tag on her collar. It reads ¨RAMBO  Beba¨. Either ¨Rambo¨ was her former name, or someone wanted to save a few pesos on a dog tag and reused RAMBO´s.

END_OF_DOCUMENT_TOKEN_TO_BE_REPLACED 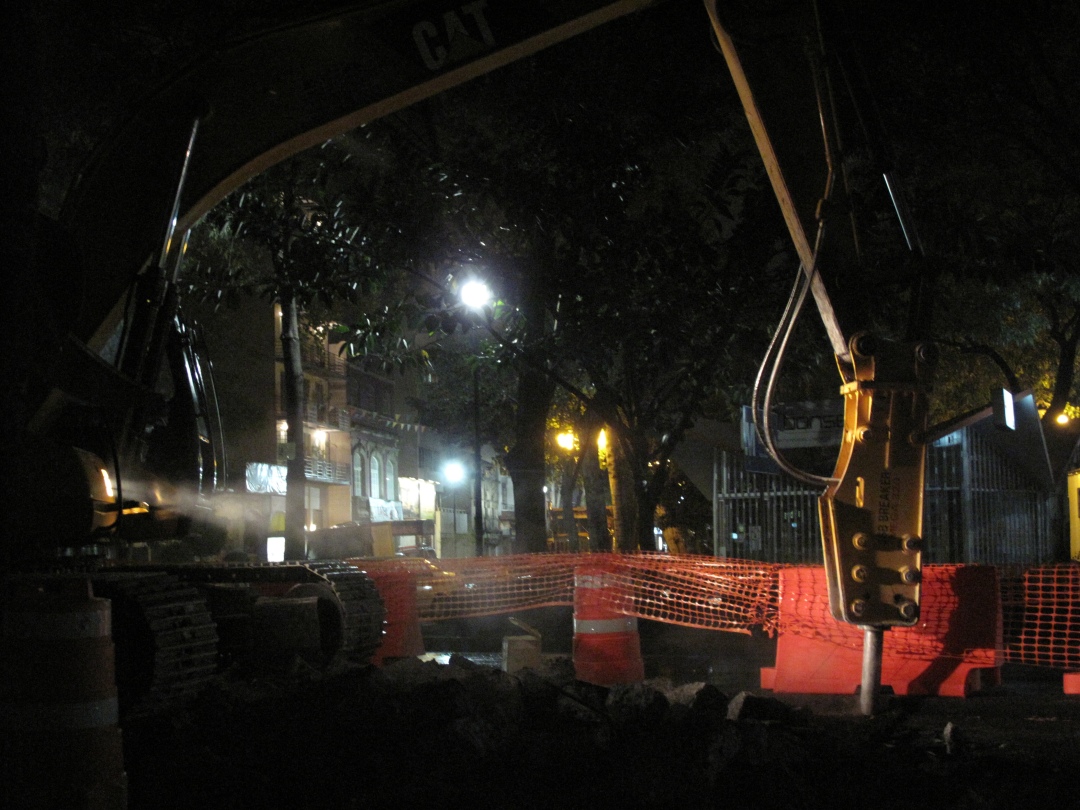 In my neighborhood, when the jack hammers and tractors get rolling at 2 a.m. you know they won’t stop until well after 5a.m.  I try to ignore it, just bury my head under my pillow a little deeper, until I muffle all the sound. I’m not too light of a sleeper, but some nights these past two months, it got hard to sleep. Here’s why. And for that, I’m not trippin.

That is to say … I know that sound.

It’s not  just an annoying 10 ton clatter that makes its way up and down Cuauhtémoc Ave. It’s more than that.

It’s that Westside extension putting a hole in Beverly Boulevard.  And it’s something like the Metro Rapid in the Valley, except out here you MUST pay to get on.

It’s also the extension of the Metrobús in Mexico City.

Which brings me to this week’s GVP. I picked the documentary, Bogotá: building a sustainable city, not because Brad Pitt narrates it, but because it’s about Bogotá, Colombia. Maternal lands.

You see, Colombia, along with Brazil were the forebearers to the style of bus service called BRT that Mexico has been recently using. It started out as a model of sustainable design, and now is a way of life that’s growing and costing lots of money.  Colombia’s Transmilenio was the first BRT I ever rode on back in 2006, when I visited.

So, check out the video, below, and learn what Bogotá can be like.  I’ll be fighting mucho ruido trying to hold on to at least a few hours of REM sleep. All in the name of progress.

As a  tattoo artist named Sol, from Ciudad Nezahualcoyotl recently told me at a party, “You need a higher degree to understand Jodorowsky. He’s not for the working man. Too abstract.”   While that may be true, Alejandro Jodorowsky is still a mythical multidisciplinary talent, best known in the U.S. as one of the progenitors of midnight cinema.

Above is La Montaña Sagrada, or Sacred Mountain (1973), a film that followed his breakout El Topo, and was bankrolled by John Lennon and Yoko Ono. The film, which at times can seem like one long perverted commercial, is actually a dense meditation on his belief in the tarot and mysticism. Definitely one that went over a lot of people’s heads. For more on Jodorowsky, check out this excellent BBC documentary.
END_OF_DOCUMENT_TOKEN_TO_BE_REPLACED

“Beat This: A Hip Hop History” (1984), was a BBC program that debuted the same year as another GV gem, “Beat Street”.

With the same stodgy wikipedia tone as all its other culture docs, this BBC piece takes us to the streets of the BX, then back to Manhattan, to hear the late Malcolm McLaren tell it to a group of B-Boys about how hip hop culture came to him. He goes at around 09:40.

Afrika Bambaata fans can rejoice, too. It’s packed with rare raw footage from the era that really set it off for hip-hop.

This week´s clip comes via one of the greatest comedic writers of his generation, Paul Mooney.  ¨Jesus Is Black¨ (2007), kicks off its first 10 minutes with ruminations on Mexicans and illegal immigration in California. Funny stuff.

Mooney might lean heavy on his use of the ¨N¨ word,  and makes harsh assessments of race in America his calling card. Still, you have to respect him, because he´s an uncompromised comedic force, who hasn´t been made soft by Disney movies and Hollywood contracts.

For the uninitiated, he may be hard to stomach. Sure, he´s racist, but there´s no denying some of the stinging truths in his work.

You can find  tons of video of Mooney´s work online. From his earlier days writing jokes for Richard Pryor, to clips of his hilarious creations on Dave Chappelle´s show.

Pryor  goes in on Paul around the 5:34 mark of this clip from a comedy roast.  Ending his session by calling Mooney a ¨brilliant writer¨.

¨Brilliant¨ doesn´t seem like an overstatement either, when you consider that Mooney is the man who created Homey D.  Clown.

I think the best college paper I ever wrote was for film theory and criticism, and used comedy theory to explain ¨Up in Smoke.¨

Prof. Doherty, who promised to give me an F if I didn´t return the video for my paper topic: ¨Touch of Evil¨ (1958), told me my ¨Smoke¨ paper was publish-able. ¨But you have to make it a little longer,¨ he said, his lips dragging the¨O¨ out like I wrote a 2 page composition.

This week´s pick looks at MJ, not the singer, but the woman. The woman of so many young men´s dreams. The confidante for so many hippies and Rastafarians across the planet. Yes, marijuana.