There hadn´t been a fatal animal attack story in the news for a while, which is why Tilikum´s killing of his Seaworld trainer last week dominated the headlines.

For me it brought to mind that terrible exploitation movie Orca (1977). And renewed international interest in the debate about captive animals who, like humans, probably don´t take very well to incarceration.

But the issue is more about the exploitation of captive animals for our benefit. A beer company used to make money off of Shamu, and when the theme park business stopped making much money, it was sold.

I´m sure this caused some headaches in the boardroom of the Blackstone Group, too, which had just purchased Seaworld from that beer company just a few months ago in a $2.7 billion deal. Business, before the accident wasn´t so hot and according to the Wall Street journal, the acquisition was

…the largest private-equity deal of 2009 and one of the largest since the financial crisis began more than two years ago.

On a more personal note, this incident recalls my 6th grade trip to the New York Aquarium in Brooklyn, Michael Jackson,  the tiger mauling in San Francisco, Bo Derek and Tohui, the Panda of Chapultepec Zoo.

Tohui, which in tarahumara means ¨child,¨ became something of a pop culture phenom back in the 1980s here in Mexico City. On a global level, it was the first time, outside of China, that a giant panda was born and lived in captivity. Mexico has one of the most successful panda breeding programs in the world.

The panda was a sensation, becoming the city´s mascot and main zoo attraction, and also a marketing wonder, with an anime movie and a hit pop song.

The song, ¨El Pequeño Panda De Chapultepec,¨ (1982) was a huge hit for Yuri, a singer from Veracruz who first came on the scene with a solid Spanish version of Debby Boone´s ¨You Light Up my life,¨ you can listen here. Yuri is considered one of Mexico´s greatest pop stars. Appearances in Playboy (rather tame, but you can see here, here and here)  led to her being dubbed the ¨Mexican Madonna,¨ something that inspired U.S. tabloid media.

END_OF_DOCUMENT_TOKEN_TO_BE_REPLACED

Worldwide financial markets are already starting to take a beating in this, the first official week following the swine flu crisis here in Mexico City.
Alas, the drug companie$ have little to worry about. Ka-ching.
Besides all the bars and clubs and sporting events shuttering over the weekend, one of the major letdowns was the cancellation of 60 lucha libre matches.
I really hope this virus gets under control for next week’s 3rd annual wrestling convention, called Lucha Libre: La Experiencia, which is a mix of informative panel discussions on wrestling as well as music and entertainment. It’s scheduled to run May 1-3 at Centro Banamex here in D.F.
On another note, this mask wearing is getting out of hand. Most people, I mean, like more than half walking around on the street don’t wear them. If things get worse, health-wise, then wearing a mask is going to have to be an ordinary fashion accessory for a while.

With total deaths at 103 so far 149, as long at the numbers don’t shoot up exponentially, we should be alright. Then again, it might just be the calm before the storm, and then, you know. Be safe. Wash your hands.

Wow. I guess it really could be…….

R.E.M-End of the World as We know it (and I feel fine)

Check out some more pathogen-related music:

Listen to The Plague.

More after the jump.

END_OF_DOCUMENT_TOKEN_TO_BE_REPLACED

Couldn’t make it to any shows last night. Sorry hiphop. Most everything was shut down due to swine flu scare. It’s being called the worst since Spanish flu in 1918. The N.A.S.A show was finally canceled after 8’oclock, even though promoters sent out an earlier email saying it was still on. They were going to drop the price if partygoers decorated their masks. 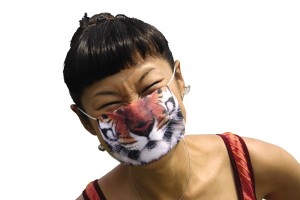 Seriously though, who even knows if those things even work. Sure, they keep spit particles from entering your nose and mouth, but according to the Mayo Clinic’s virus disaster prep list, you need an N95 respirator mask to fight bird flu, and I know that costs more than the 3 pesos mask I have on.
Either way, that’s the only protection we have at the moment, other than staying in doors. All public gatherings have been given the government word to stay closed — in the Mexico City region mass is even canceled today.

All of these steps are necessary, as the virus is spreading:

The latest reported cases shine a light on a Kansas couple and a group of New Zealand students. It makes the worry much bigger. A husband returning home from a business trip in Mexico just a few days ago, brought it back home to his wife. Members of a class returning to New Zealand after a language excursion to Mexico are said to have contracted the virus.
You can only image how the spring breakers are feeling now.