It was Twitter that led me to this chamo. The story I worked on before that was about bitcoin or something.

I wanted to get back to something that had the potential to entertain in a city that was hyper violent and barely had toilet tissue. It came in the form of a group of guys who made home movies to show to the hood and also rapped on the side.

The leader, Joe, was a rapper who had the story of redemption through God and beats. I met a bunch of guys who were doing some reggaeton-rap stuff. They made a movie that reminded me a little of “I’m Bout it”. It was mostly because of the production value. It’s always the production value with these hood movies.

We went to their hood; their community center. It was beautiful, rising there were the slums, the barrio that ran up the mountain.

And I was safe, because the Garcha twins were right there with me.

Watch the video at the top if you haven’t already. It took some time and some care. Plus the kid from the La Linea hood, who hops on to bust a rhyme around the 4:34 mark is everything about hip-hop culture. 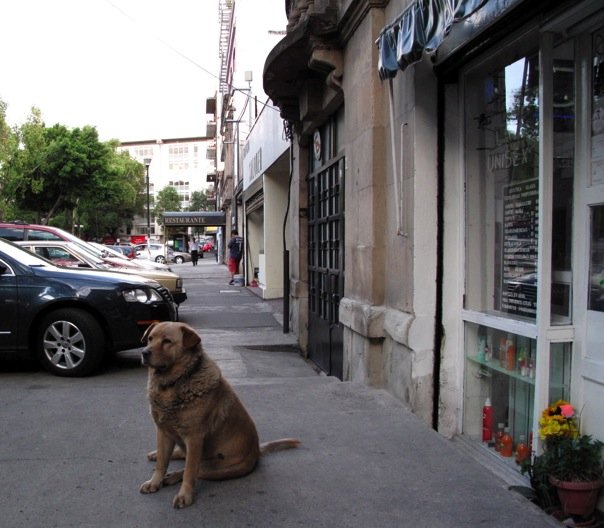 Dude, I’d be the last person to consider themselves a dog person.

There was Ginger, the family pet. And man, I loved her. A lot.

END_OF_DOCUMENT_TOKEN_TO_BE_REPLACED

I first met DāM-FunK at Cinespace in LA some time in 2007. He was something I never saw before, a funked out space alien with turntables, shouting out the names of $200 records as he played for a crowd of hipsters. Well, the man, a former Inglewood hip-hop keyboardists, now key-tarist, has made some big strides in his career and is the modern day incarnation of a funk artists. And instead of playing for other people at Cinespace,  he has his own long running L.A. residency called Funkmosphere.

I caught up with DāM-FunK before he stopped in Houston (for those taking notes, si…I’m in Houston now, but more on that later.)  Here’s what we talked about. Full interview at Houston Press.

Rocks Off: So what happened after you saw that tweet about modern funk, and why was it incorrect in your opinion?
DāM-FunK: One of the guys on Twitter was like “Nah, you can’t forget about Dam-Funk.” So, it’s like it caused a little lightening storm a couple of days ago and I watched it. I would hope that people, the historians, writers and critics can keep the facts straight because now they’re going to try to use “modern funk” as the term now, because they know they can’t say neo-soul any more.

And I just hope that people don’t forget about some of the funk that really is happening with synthesizers, drum machines, and beautiful chords. It’s not the chicken scratch type style of funk or soul that was considered modern funk. So the guy from Jimmy Fallon’s show, he incorrectly is trying to change history — innocently if you will — because I think right now people are just do excited that D’Angelo dropped this record.

END_OF_DOCUMENT_TOKEN_TO_BE_REPLACED 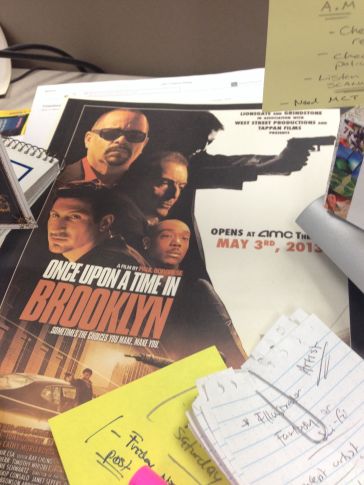 In this new year of 2014, I wish everyone a chance to get closer to their dreams.

My sister asked me the other day, “what do you do at your job?”

I sad, “Well, I mostly upload stuff to the web and make posts on Facebook and Twitter.”

“I’m really a writer though.”

“That sounds awesome, are they hiring?”

Nah, dude. They’re not. Go paint a picture (she’s a talented artist), or better yet, go write a screenplay.

I met a guy recently who wrote a script. He made it into a movie with Ice-T and Ja Rule as actors in it. The screenwriter also starred in it. You see it? It’s pictured above. 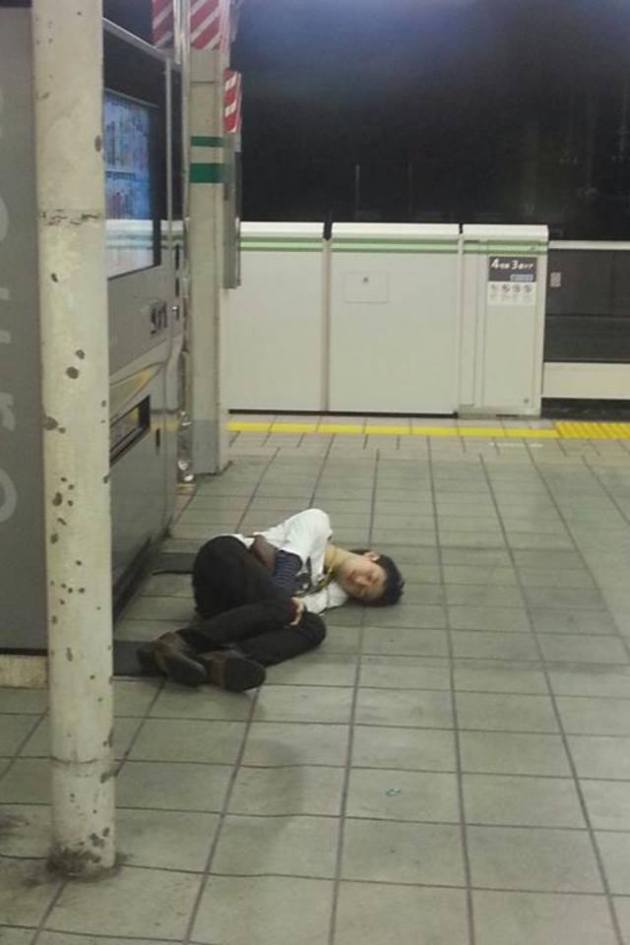 The homie Masaaki continues to send me photo dispatches from Japan.

Here is a shot taken some time after party hours at the Ueno St station.

Basically, he says that Japan is so safe at night that you can become slouched somewhere in public and chances are slim to none that someone will run your pockets. 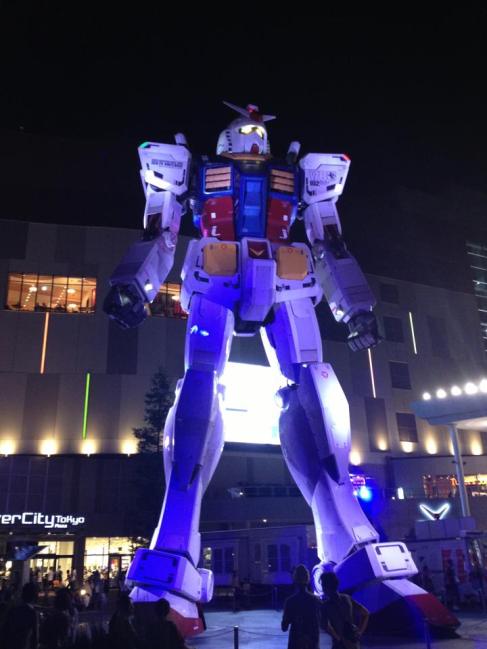 It’s almost an injustice that our society doesn’t respect giant robots as much as the Japanese. I mean, would you see  a display like this in front of the local mall in New Jersey? Probably not. Ever. Like in a million years. This photo was shot recent in Shinjuku.

We just don’t like big ass robots, and I don’t know why. It killed “Pacific Rim” at the box office this summer and it made a really dope movie like “Iron Giant” a flop at the box office when it dropped some 13 years ago. 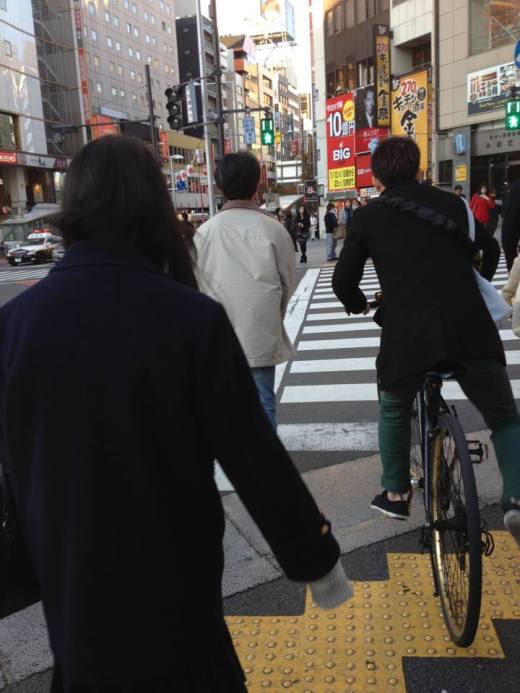 He says  Shibuya,  downtown Tokyo, is the place to be. Masaa as I call him, was making his way to work when he dropped me these two photos.

We go back a long way.

It was Japan’s steady two-hundred-year relationship with Mexico that helped me make the acquaintance of Massaki S. that summer. He went to Mexico City on a four-year personal cultural exchange. Just him, his Yen and his dreams of working less than a 6-day work week.

The homie was in intermediate level three Spanish class with me at the state university back in 2008.

He back on his Japan grind, leaving his home in the country for a courier gig in the big city.

Below, he’s on the 15:30 train on the Hanzomon line. We’ll see how his invite to join him for the Olympics pans out. 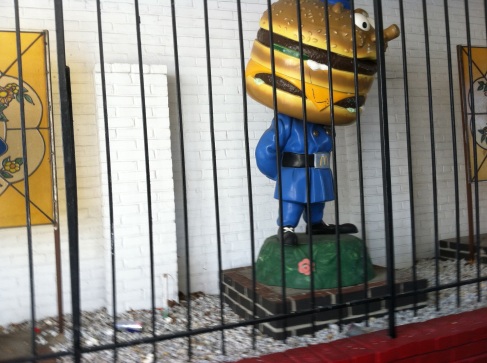 It’s the little things you remember when you were growing up. For instance, there was a time when there was no McDonald’s on the Garden State Parkway. I remember when this quasi-rest stop was new.

It had a vibrant Mickey D’s display with a bunch of characters. I thought it was ironic that the law enforcement character was behind bars, but I know it was probably for his own protection.

Even though I go here almost never, the McDonald’s near exit 142 on the GSP will always hold a special place in my heart.

When I wrote about this young woman in 2009 I had no idea she’d still be around to bask in the glory of fame and hip-hop. She’s stuck it out, and while I’m not an unabashed fan of her music, I kind of dig that she did a few things: come out the closet and continue to perform and make music. Truthfully, I don’t give a damn that she came out, but from what I’ve heard it’s the queer community that’s giving her heavy support back in Mexico. That’s one way to keep those concert dates hitting.

Here she is at some industry shin-dig with the flavor of the moment, French Montana and the  Wu-Tang Chef Raekwon.  She made a quick East Coast tour stop in May 2013, when she played shows in NYC and Philly.

I really enjoy the code switching going on here, I mean,  I’ve never heard Ye talk in his “corporate” voice. I might be one of the only guys in the world who didn’t listen to his last  album all the way through. I was a huge fan of that early mixtape work though. Can never take anything away from this man. I’ll even call My Beautiful Dark Twisted Fantasy an early classic.

His mention of Walt Disney as an idol? OK. I guess he knows the history on that figure.

All in all, I’m impressed with what he’s done in his life. Keep it up, Ye.