I go to one of the greatest journalism schools on the planet, son. The best I could muster was a few flicks on election day. It was a great experience. Midterms are the boring side of elections in most cases. Too bad I didn’t get into school two years ago. Would’ve loved to do some Obama stories. This photo I took is mad yellow. Blame it on the gym floor. Or blame it on my novice skills. One day I’ll look at it and laugh. Actually, I was laughing when my professor saw it and was like: “Why is it so yellow?”

There goes my travel fellowship. Wait, I think I nixed those chances way back in September. Still, we keeps pushing.

Below is a bit of raw reporting I handed in to a colleague who was putting in extra-fly work on the election coverage tip. **Shouts to Beth Mo!

When I look over these notes, I see 1,000,000 things missing. Sloppy! Just gotta learn. The original idea was for me to do some type exit poll interview. These are the results:

Snapshots of Voters in Park Slope.

Voted for: Cuomo and Gillibrand. Chose one Republican (didn´t catch who)

Voted for: Charles Barron, stuck with Dems in other races.

Why: ¨I knew more about [Charles Barron] from reading about him in the Amsterdam News¨ Didn´t vote for Cuomo, ¨because it was more about his father.¨

Voted: Libertarian candidate for governor and Working Families in other races

Why: It would be nice to have a Libertarian governor to go along with all the Democrats

(voter was raised in a democratic family)

Why: Because that was the best choice.

Voted: ¨Working families all the way¨

Why: ¨I don´t vote republican¨

Voted: ¨Democrat all the way.¨

Why: ¨You have to have some sympathy for him, because in his case, his wife cheated on him¨

Voted: Democrat down the line

Why: I could never vote for Carl Paladino. The Republican Agenda does not fall in line with mine.

¨There will be Republican sweeps in other states, so I thought  about that in part.

Why: Best option I felt comfortable with. At this time they need to have some resistance to what everyone thinks is going to happen.

Why: ¨They´ve been my reps for years and years. The kneejerk reaction is to take them out to affect change.

Affiliation: For voting purposes, I say Democrat (he seemed like a reluctant Dem)

Voted: Cuomo, voted Democrat in all the major races.

Why: I don´t like the way Paladino talks.  For all intents and purposes I vote Democrat.  I vote for the people who are going to give the people the most power, and that´s usually not the republicans. 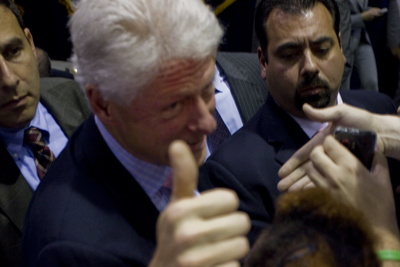 Man, Bill Clinton is just a live dude. Everyone wanted to shake his hand after the Cuomo rally I attended for an RW1 assignment early last week. It’s obvious he’s popular with the ladies, but man…dudes young and old, black, white, Asian, Latino? 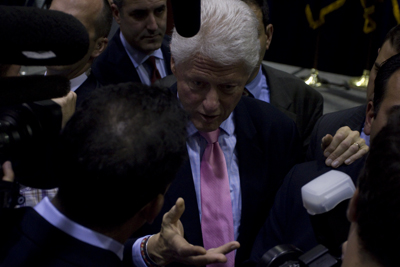 Everyone wanted to say they touched this man’s hand. I of course just needed a clean shot, which I didn’t really get. He grabbed a few hands that reached out above my head. I ducked. 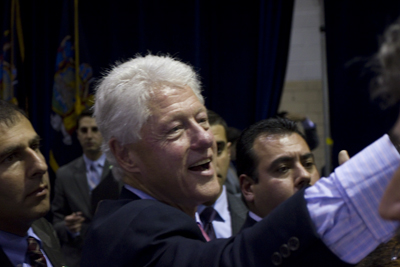 I don’t wanna touch you, Billy Clint. He is something like a stone cold pimp, however. For that I will always give you respect. 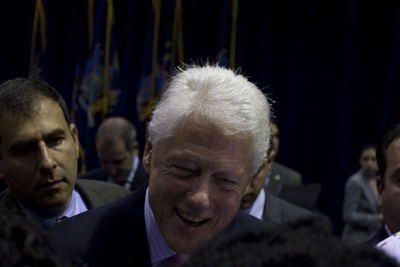