Google Video pick of the week #003

Former Playboy photographer and WWII vet, Russ Meyer, directed this week’s 1965 pick, Faster, Pussycat! Kill! Kill! Some call it a feminist cult classic, others call it violent trash. This is what Roger Ebert wrote about the director and his movies, when this film was re-released on DVD:

Take away all the jokes, the elaborate camera angles, the violence, the action and the sex, and what remains is the quintessential Russ Meyer  image: a towering woman with enormous breasts, who dominates all the men around her, demands sexual satisfaction and casts off men in the same way that, in mainstream sexual fantasies, men cast aside women.

The movie holds up well as both a time capsule of 60s fashion, and a testament to the extraordinary sexiness of Japanese-American actress Tura Santana. You can see more movie stills, here.

Best Reason to See It: It’s about a gang of killer go-go dancers. 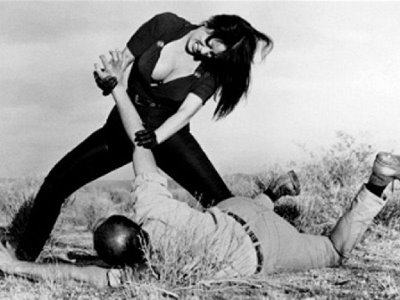 Photo of Tura Santana from dogmatika.wordpress.com