For those who already know of my obsession with wanting to report on Dr. Dre’s children, I promise this is the last post (unless someone pays me handsomely to do a follow-up, or either Hood Surgeon or Manaj become newsworthy).

When I was on the trail of Hood Surgeon some 4 years ago, I also came to know Manaj (pronounced Mi-NAJ), a woman from Southern California’s San Fernando Valley who also rode the “I come from Dre,” wagon. She was pushing a documentary called Daddy’s Shadow at the time. She even had a little online marketing action going that included a description of the flick:

Daddy’s Shadow is a feature-length documentary centered on my quest to break into the music industry despite my legendary multi-millionaire father’s objections and lack of support.

I got to meet Hood Surgeon, who confirmed that Manaj was his sister. I attempted on several occasions to meet up with her, but each time the plans fell through. I found her a bit more intriguing that the young Curtis McLemore, mainly because of the mess Manaj seemed to be in. She was coming out and saying that Dr. Dre stood in her way and didn’t want her in the industry. Okay. To make matters all the more interesting, she was planning to put out this documentary under a company called Wigga Wreckords, which was run by a guy calling himself Judge M. 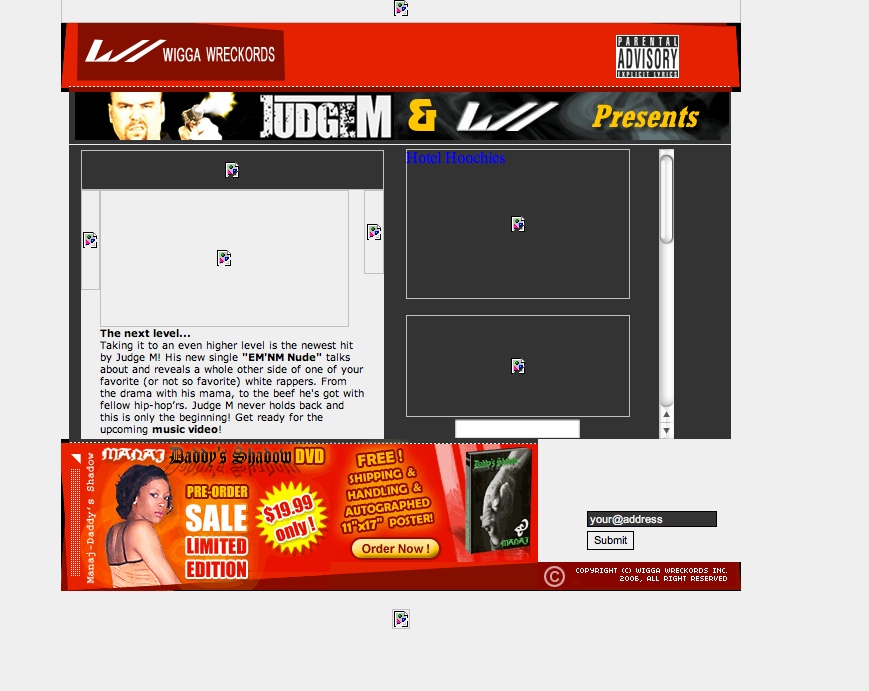 I spoke to Judge M who told me his name was Matt and that he was a computer programmer. He seemed pleasant enough. I could tell he was just trying to ride Manaj’s affiliation to see how far he could go in the industry. Amazon show’s he had a .99 offering entitled “What a Wigga Iz.”  He later got really defensive on the phone when I started to ask him about why he was working with Dre’s daughter, and asked him to respond to her allegations he was somehow manipulating her. Later I saw the cover of his album. This is wrong on so many levels. So many levels.

I wish I was making all of this up. But it’s true.

Just to prove it to you, after the jump is my unedited working draft from this story. Several drafts of it were sent to colleagues and editors whose interest level was something like -10 on a scale of 1 to 10.